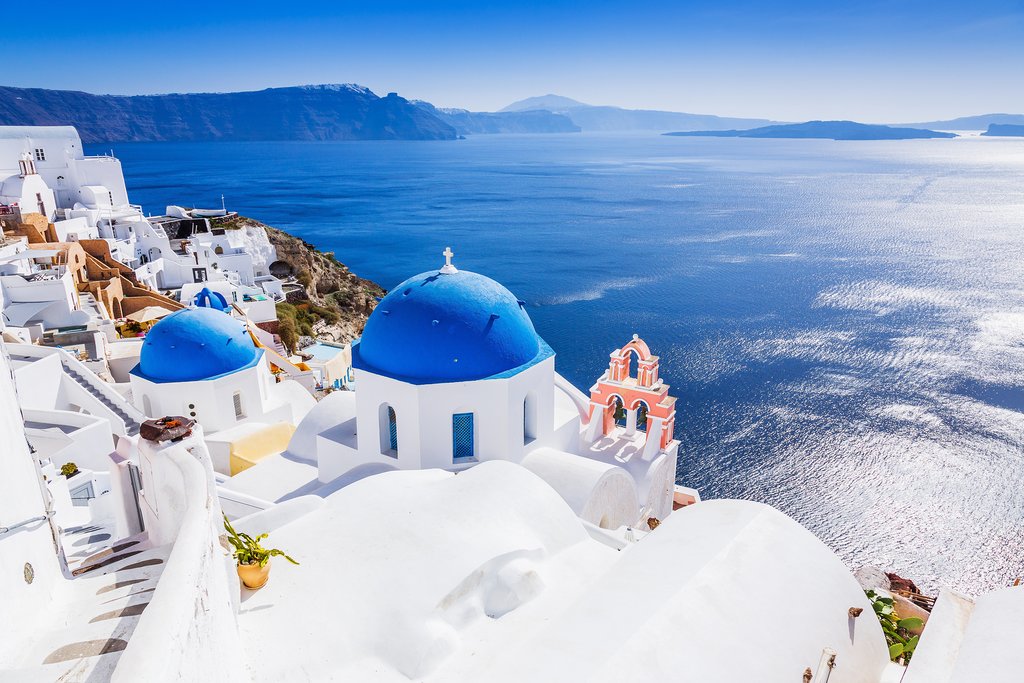 Its name may imply something big, but it is quite the opposite. It is a small village in the hinterland of Santorini, dug in the bed of a stream. The two or three churches with elaborate bell towers show the passion of the locals. What makes Megalochori famous are its vineyards and the three most important wineries of the island: Boutari, Antoniou (of the Venetsanou family) and Gavala. Touring the village is ideal after a swim or passing by for an afternoon stroll before heading to the busier parts.

It is not only the most famous beach of Santorini. Here there are also remains of the Byzantine period, Agia Irini, from which Santorini got its name, the church of the Holy Cross and the Museum of Minerals and Fossils with excellent exhibits.

Tip: A path that starts from Perissa leads to the ancient city of Thira in Mesa Vouno (Prophetis Ilias).

This unique settlement is built on a five kilometer long ravine. The imaginative Santorinians dug their houses into the walls of the ravine. By plastering volcanic earth they created domes that stand alone without support with wood or iron. It is an opportunity to admire the creativity and practicality of the inhabitants who sheltered in the caves. And of course you will go up to Panagia Trypa to light a candle.

Tip: In Mesa Gonia you can see what was left by the devastating earthquake of 1956. The canaves (underground wine cellars) reveal the commercial power that Santorini had as a wine production center.

You won’t see many sights in Imerovigli, but the view from there will reward you. It is located exactly in the most privileged position of the caldera, overlooking the volcano and Thirasia in the background, while it has a calmness and quiet that puts you right in the energetic style of the island.

This way you’ll oversee the whole island and be in the best position to see the… pirates or the sun setting! If you have time, take a look at Our Lady of Malta with the wooden iconostasis. Her icon is said to have been found near Malta.

Tip: Skaros is a castle built by Markos Sanoudos as an observatory. Climb up there to gaze at the horizon…

Following the brow of the caldera you reach Firostefani, to admire the best view of the volcano. The cliff becomes so steep, it takes your breath away. Here you will visit the Petros M. Nomikos conference center, where the three-dimensional photographic reproductions of the murals of Akrotiri are exhibited, all gathered in one space! Between Firostefani and Imerovigli is the monastery of Agios Nikolaos, founded in 1651 by the Gyzi family.

Tip: On the way to Kamari there is the Wine Museum, which is housed in the Volcan Wines winery of the Koutsoyiannopoulos family. You will see the history of Santorini wine from 1660 to 1970.

Fira is the busiest point of the island. The amazing position they hold in the caldera – hanging on the cliff – gave them a huge tourist boost, resulting in them being today the most densely built part of Santorini. For her your walk in Fira is better to prefer in the morning, which is not it is crowded. Take a look at Theotokopoulou Square, the meeting point with the cafes that are full of visitors.

Gold Street with its jewelers and mall Factory are poles of attraction, but you move towards it Budi, to gaze at the caldera. The view is unique as are the happenings that take place there. It’s now the turn of the Archaeological Museum of Thira with collections of sculptures and inscriptions from the Archaic to Roman period but also vases from the Geometric period until the Hellenistic period.

In the leading Museum of Prehistory Thiras you will enter his spirit culture that developed in Akrotiri and you will be amazed the frescoes, which remained intact under the lava.

The Belloneio Foundation is the cultural center of the island, which stands out for its ocher and cypress colors, while the Gyzi Mansion has copper engravings from the 16th-19th centuries. with issues of local life. The Orthodox cathedral of the Metropolis has an amazing position in the caldera and wonderful hagiographies, which were edited by the Santorinian painter Christoforos Asimis when it was rebuilt after the earthquake of 1956.

The Catholic cathedral will impress you with its architecture and bell tower, but also the Catholic nunnery with the twelve nuns is worth it. At the Folklore Museum of Manolis Lignou in Kontochori Fira you will see the cave with the layers of deposits from the volcanic eruptions and an authentic canvas.

Tip: From Fira, telerik will drop you off at Gialo, if you don’t want to get caught in the saddle of a “baron” or go down 587 steps!